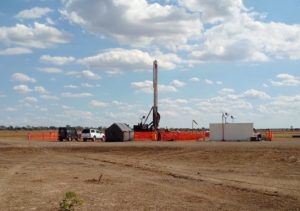 Ground-breaking plans to build a ~15MW geothermal plant in Zambia are on track after REPP approved a loan to finance the drilling of up to three additional slim wells for pre-feasibility resource definition.

Although geothermal power generation in Africa is currently focused on the Great Rift Valley in Kenya and Ethiopia, exploration suggests that Kafue Trough (a Permian era extensional basin), in Zambia’s Southern Province, is also suitable for the technology. The difference is that, unlike Great Rift Valley projects where the heat source is magmatic, the heat source in Zambia is within crustal fault zones where deep circulating fluids are heated by the geothermal gradient and held in place by a cap rock. This geologic setting has been successfully exploited for power generation in Nevada, USA, and Turkey.

To date, developer Kalahari GeoEnergy Ltd has privately financed the drilling of 18 exploratory wells (thermal gradient holes and slim wells). Five of these have intersected a near-surface aquifer with temperatures of more than 100 degrees Celsius. This shallow aquifer is fed from a deeper ~150 degrees Celsius resource that is the target of the additional drilling.

The company now intends to drill and test a further three slim wells which will enable the collation of additional data for reservoir modelling, and which will be used in pre-feasibility and feasibility studies. The ultimate objective is to develop a 15MW power plant.

Under the REPP agreement, an initial loan tranche of US$2.2m will be dispersed to fund two slim wells, with a further US$1m being made available subject to either of the two wells demonstrating deep reservoir temperatures of at least 130C.

Adding geothermal to Zambia’s energy mix would allow for a renewable source of baseload capacity, and have a potentially transformative impact on the region by facilitating the expansion of geothermal energy generation both nationally and regionally.

* Note: REPP is providing finance for drilling only. KPIs refer to the plant once operational.

The convertible loan facility from REPP will enable us to drill and test additional slim wells to determine the capacity of the reservoir. The addition of dispatchable, sustainable energy to the grid will be a positive step towards Zambia meeting its development targets, while the secondary uses of geothermal energy should attract investment into the district.