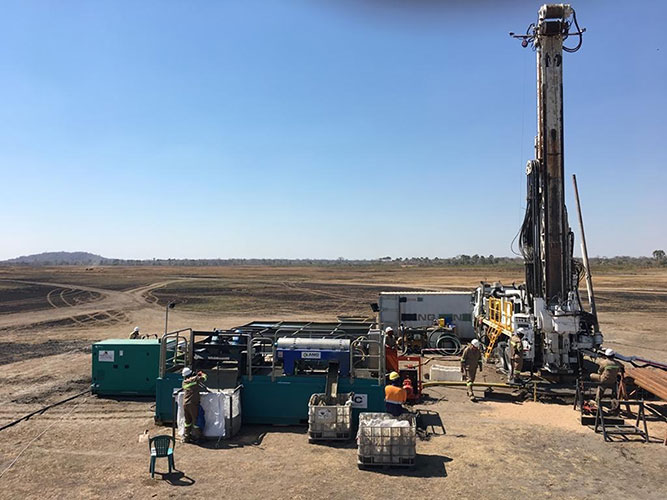 Kalahari GeoEnergy Ltd, the Zambian geothermal exploration company, is pleased to announce the completion of the drilling of eight (8) temperature gradient holes and the commencement of drilling slim wells at the Bweengwa River Geothermal Resource Area as part of its resource delineation drill and well testing programme, which if successful will lead to a full technical and commercial feasibility study commencing late 2019.

Bweengwa River Geothermal Resource Area
Bweengwa River is situated in the Kafue Trough, a sedimentary basin filled by the Permian-aged Karoo sequence, overlying metamorphic basement rocks; it is located to the west of Lusaka and extends westward into the Barotse Basin. The Company has to-date identified six geothermal energy targets including Bweengwa River, on all of which it is conducting geothermal exploration.

The surface manifestations of the Bweengwa River Geothermal Resource Area include three groups of geothermal springs that extend over 9km and lie on the southern bounding fault of the Kafue Trough. The resource area is 35km north of the Southern Province town of Monze and 200km from Lusaka. Ongoing exploration has to-date included geology, hydrochemistry and the drilling of fourteen (14) temperature gradient holes totalling 3,500m, eight (8) of which have been drilled in 2019.

Results confirm a geologic setting conducive for geothermal hydrothermal systems and also give a strong probability of a medium-low enthalpy geothermal resource that can support a power generation project of at least 10MW. Heat-in-place, power density and heat flow methods have been used, providing a consistent estimated usable resource capacity in the range of 10-20MW.

The Bweengwa River Geothermal Resource Area contains compelling evidence of the three key elements required for hosting a hydrothermal system: temperature, permeability and water. Evidence for minimum reservoir temperature from 130⁰C to more than 150⁰C is provided by both fluid chemistry and already-drilled temperature gradient holes. Permeability is confirmed by the discharge of the hot springs along the regional bounding fault and the associated geologic structures. The reservoir is in fractured basement rocks within or adjacent to the basin-bounding fault. The source of water is local meteoric water that is plentiful.

In parallel to the geothermal exploration, the Company has engaged with the local pastoral community, local and national government, and NGOs, regarding the development of direct energy applications for local dairy processing, horticulture, aquaculture and tourism opportunities. This initiative is expected to create socio economic uplift.

Work Programme
In order to test the geothermal resource for the Bweengwa River Geothermal Resource Area and to further characterize the geothermal reservoir temperature, permeability and size, and confirm initial estimates of reservoir capacity, the Company will now drill up to three slim wells. These wells are targeting 130O – 150OC geothermal fluids in the fault zone. If the wells and subsequent testing are successful, the results will be used in the technical and commercial feasibility study that could be completed by the end of January 2020.
The Kafue Trough is highly prospective for additional geothermal resources similar to Bweengwa River; it is therefore considered realistic that ongoing exploration may well significantly increase the current estimated resource capacity.

Exploration results have been reviewed by Geologica Geothermal Group Inc. an international geothermal resource exploration and resource assessment consultancy.
Peter Vivian-Neal, the CEO, comments that “Results obtained to-date continue to provide confidence that Bweengwa River has the characteristics of a viable geothermal resource for power production”.

“The current model of a 10MW or greater, power project, to be generated using binary technology, represents a significant step towards the Company’s objective of producing geothermal power. Ultimately, geothermal power may provide a valuable component in Zambia’s drive to diversify sources of energy, increase generation capacity and the distribution of productive power as well as the ‘power to empower’ the community”.

Geothermal Energy in Zambia
Zambia hosts a number of geological structures that are recognised as being prospective for geothermal energy including non-volcanic extensional basins, hot granites and, in the north, part of the East African Rift System. Historic work identified a number of prospective targets and a Zambian-Italian joint venture built a geothermal pilot plant on the Lake Tanganyika Rift structure in the 1980’s.

Geothermal power is sustainable, operates at a high capacity and is environmentally benign. In addition, the direct application of heat for agro-industrial processes could have a significant impact in strengthening food security at a time of uncertainty as to the effects of climate change.

About Kalahari GeoEnergy Ltd:
Formed in 2010, Kalahari GeoEnergy is a privately owned, Zambian-registered exploration company whose objective is to be an Independent Renewable Energy Power Producer. The management and their consultants have wide-ranging experience in exploration, development and energy utilisation.